The History of Trash Capture and Stormwater Hoods and Traps

Catch basins, stormwater inlets, and other specialized structures have a long history of use as part of municipal separate storm sewer systems (MS4s) in controlling stormwater runoff. So too have the many devices used with them to aid in the removal of pollutants, such as grates, traps, hoods, and sumps.

A SNOUT® from Best Management Products is a modern example of a trap or hood. With the aid of new appurtenances based on older concepts, these simple structures are being more effectively used and maintained as a first line of defense against non-point source pollution in urbanized areas to improve stormwater quality.

Why Is Trash Capture Necessary? 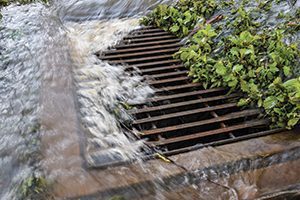 In its simplest form, a stormwater inlet’s primary function is to intercept sheet flows to prevent the accumulation of stormwater in an area where flooding could impede traffic or pedestrians, cause property damage, or otherwise present a nuisance.

However, these inlets to MS4s or combined sewer systems (CSSs) are often the entry point of pollutants from diffuse sources found in stormwater runoff. As a result, pollution is often discharged untreated, directly into our surface waters.

What Is The Benefit From Using Hoods or Traps?

A primary benefit of hoods or traps is trash and floatable debris capture. A 1995 study of New York City catch basins compared the relative effectiveness for capturing trash, floatables and other gross-pollutants of structures with and without hoods.

The hooded structures captured 85 percent of the litter that entered the combined sewer inlets compared to 30 percent for the catch basins without hoods (New York City Department of Environmental Protection, 1995, cited in EPA Doc. 832-F99-008 September 1999).

With the benefit of hydraulic sizing and deeper insertion depth of the SNOUT hoods, studies in Myrtle Beach have shown inlet trash capture exceeding 90% is possible.
The use of deep sump structures, as part of the stormwater system along with simple components can create numerous “micro-detention” nodes throughout a stormwater conveyance and allows for moderate levels of pollutants to be captured in an economical manner.

Typically, this method requires much lower on-going maintenance needs than traditional “tray-type” catch basin inserts or baskets, and a significantly lower capital cost than most “end-of-pipe” only controls. Further, the ability of deep sump structures to intercept gross-pollutants and finer particles such as suspended solids (SS) have been well documented.
A study in New Jersey found an average SS capture rate of 32 percent over several storm events (Pitt and Field, 1998). The apparent flow dynamics which result from of a watertight, vented hood further improve the removal function of a sump structure. 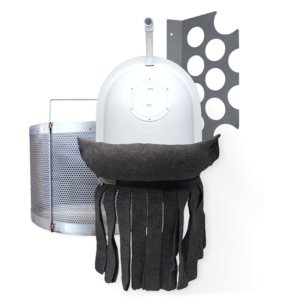 Field tests of the SNOUT have shown T.S.S. reductions of over 50% and a third-party laboratory test with the SNOUT® water quality hood, at Alden Labs in Holden, MA in documented a 64% reduction in sediment at a flow of 225 gallons per minute (gpm).

The SNOUT® Stormwater Quality Control System uses vented fiberglass hoods and related components to improve water quality and control flow quantity.
Hoods for large diameter pipes and flows up to 100 cfs are available. SNOUTs are also available for both flat wall and round structures.

Several accessories can enhance the performance of this hood system including Bio-Skirts® for oil reduction, Stainless TrashScreens for Full Trash Capture, and Turbo-Plates for significant reductions in sediment.

Sign-up for our newsletter to get up-to-date news on all of our BMP products.